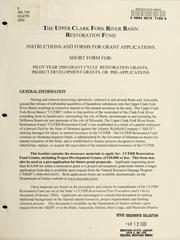 Published 2000 by The Program in Helena, Mont .
Written in English